OP Jacob Brown (10-17) recently graduated from the Royal Military Academy at Sandhurst and invited along some of his contemporaries from Pocklington Boarding to witness the grand occasion.

From joining the Combined Cadet Force (CCF) Army contingent in Fourth Year at Pocklington School, Jacob fully embraced the learning and development opportunities the activity offered and continued his cadetship into Sixth Form. After completing his degree in International Relations at the University of Groningen in the Netherlands, Jacob was successful in gaining a place at the Royal Military Academy at Sandhurst, where all officers in the British Army are trained to take on the responsibility of leading their soldiers.

The Army Officer Commissioning Course lasts 44 weeks and covers military skills, fitness, decision making and leadership, before the Officer cadets select their future corps or regiment and put their new skills into practice on complex and demanding training exercises in the UK and overseas. 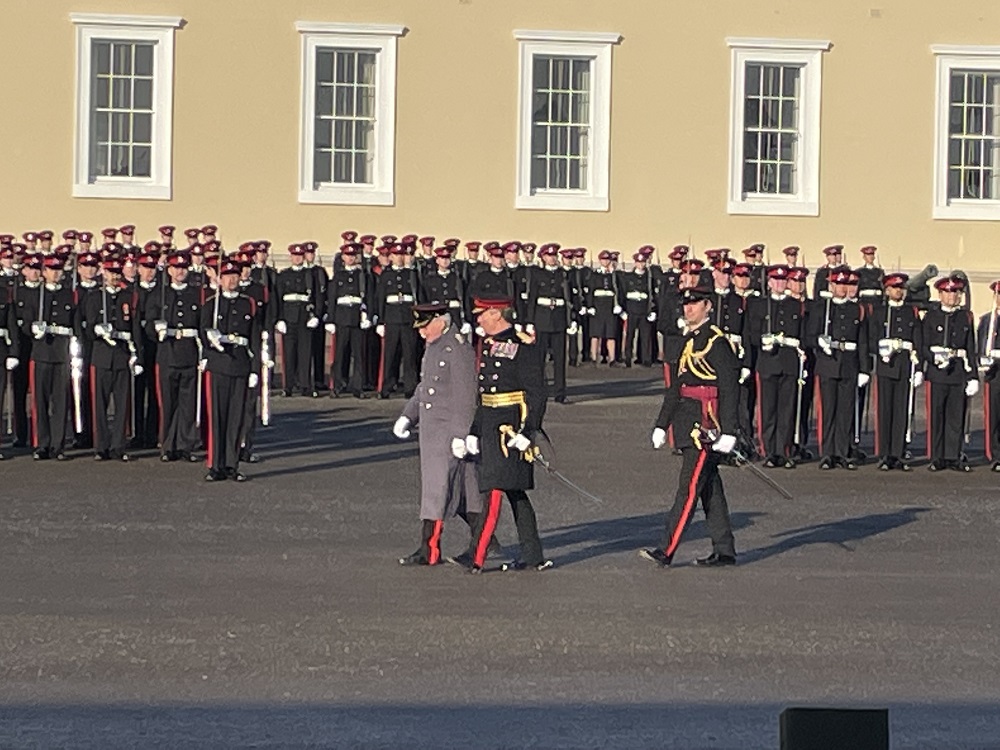 Jacob was part of the first King’s commission to graduate from Sandhurst under the reign of His Majesty King Charles III, although His Majesty was not officiating on the day. Instead, the ceremony took place in the presence of the dignitary and Sovereign’s representative, His Royal Highness, The Duke of Gloucester KG GCVO.

The Sovereign’s Parade was a grand occasion and a great opportunity for the Fenwick-Smith boys to reunite, celebrate with Jacob and be proud of their Pocklington roots. They all enjoyed the day and the camaraderie which they summarised with the following quotes:

Jacob’s former Housemaster, Patrick Dare reflected: “It was a fantastic occasion and an honour and privilege to be invited to attend by Jacob and his family, who I got to know well during Jacob’s time as a boarder in Fenwick-Smith House. To witness the progression of a former pupil, from young CCF Cadet to a now fully-fledged serving officer in the British Army was a very proud moment for all of us who knew him at school.”

OP Rob Smith commented: “Celebrating Jacob's King's Commission into the Regular Army at the Royal Military Academy Sandhurst was a fantastic day for us. We were very proud to observe this immense achievement and the beginning of his military career as a brotherhood of Fenwick-Smith House boarders.  It has been fascinating to reflect on how the CCF continues to inspire and shape our lives and careers since leaving the school over five years ago, with Jacob's recent commissioning into the Royal Signals having been a prime example of this. It is particularly exciting that he is expected to be joining the British Army's new Army Special Operations Brigade. We wish him the very best in all his endeavours, certa cito.”

Henry Foster concluded: “The Fenwick-Smith House boys consider ourselves a one-unit team so naturally, when one of us achieves an accolade, we all have also. That said, in all seriousness, to say we are proud of Jacob would be an understatement.”

Reflecting on his memorable day, Jacob said: “After 44 weeks of Officer training, I am incredibly proud to have commissioned from Sandhurst. As I now move onto the start of my career in the Army, I am reminded of how much I owe to my time at Pocklington School and the impact it continues to have over my life. Whether it be from the classroom, the rugby pitch, the boarding house or the parade square on Thursday afternoon CCF, I left instilled with the virtues, confidence and determination which have shaped me into the person I am today.

He continued: “Pock will always be a place I hold close to my heart, and I was warmly reminded of this on my commissioning day where I was humbled to share it with lifelong friends from Fenwick-Smith and even Mr Dare himself. Their support and guidance over the years have been invaluable in setting me up for success.”

Jacob’s commission follows on from fellow OP James Harrison’s (11-18) commission to the Yorkshire Regiment. James graduated from Sandhurst in August in the last Queen’s commissioning intake.

We wish both Jacob and James well in their army careers and look forward to hearing how they progress. OP Simon Holden (97-05) has been appointed the Commanding Officer of HMS Dagger, a brand n More...